The Eric E. Conn Young Investigator Award, first given by the Society in 2011, honors Eric E. Conn’s contributions in plant biology by recognizing young scientists who will be inspired to follow in his footsteps. The award recognizes not only outstanding research but also demonstrated excellence in outreach, public service, mentoring, or teaching by plant scientists at the beginning of their careers. This award is a monetary award made biennially for demonstrated commitment by a member of the Society who is generally not more than five years post-Ph.D. on January 1st of the year of the presentation. It also provides a one year membership to the Society. Breaks in careers will be considered when addressing the time limit of this award. 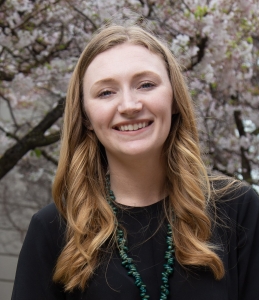 Katie Murphy is recognized for her important contributions to the field of environmental stress tolerance in plants and her dedication to outreach and service to the plant biology community.  Katie’s combined molecular, biochemical and genetic studies in maize have provided substantial new insights into the biosynthesis of species-specific maize terpenoids and their function in pathogen defense and other plant-microbe interactions.  Katie’s outreach activities are especially noteworthy for promoting diversity and inclusiveness within the plant biology community.  Her activities include serving as an Early Career Representative on the ASPB Women in Plant Biology Committee and as an ASPB Ambassador.  Katie was awarded the 2020 Ambassador of the Year for these outstanding contributions.

The Eric E. Conn Young Investigator Award will be offered again in 2023. Please check the nominations page in January 2023 to make a nomination.