Unleashing a Decade of Innovation in Plant Science: A Vision for 2015-2025

In September 2011, representatives from the full spectrum of plant science research – from basic to applied and industry to academia – gathered to develop a consensus plan to invigorate and guide plant science research over the next decade. The meeting marked the first time this diverse community assembled to unify their vision for the future. Summit participants were charged with articulating research priorities in plant science that positively impact grand challenges in areas such as health, energy, food, and environmental sustainability. A document, “The Green Frontier: A Unified Vision for Plant Research,” reflecting the consensus of the discussions and opinions exchanged during the 2011 Summit was assembled and distributed.

A second meeting, the Plant Summit 2013, consisting of a smaller cohort of plant scientists whose charge was to build upon the foundational work of the first Summit and develop a succinct compilation of recommended plant science research priorities, was convened in January 2013. The Summit report, Unleashing a Decade of Innovation in Plant Science: A Vision for 2015-2025, describes recommendations to excite, engage, educate and, perhaps most importantly, impact future budgetary discussions and decisions at the state and federal levels.

An outcome of the 2013 Decadal Vision was the creation of the Plant Science Research Network (PSRN). In 2015, the Boyce Thompson Institute for Plant Research (BTI) and ASPB received a $730,000, five-year grant from the National Science Foundation to create the Plant Science Research Network (PSRN) (see news report). The PSRN was formed in 2015 as an outcome of the Decadal Vision (2015-2025) to overcome ingrained habits of individualizing disciplines and subdisciplines within them, with an eye toward broadening thinking and lowering barriers to effective interdisciplinary integration of ideas and approaches.

More information about the Plant Science Research Network can be found at plantae.org/PSRN

Join the PSRN on Plantae network to stay in the loop on upcoming reports, activities, science policy, and research opportunities.

In 2019, the PSRN convened the Plant Summit 2019   The Plant Summit 2019 attendees included representatives from 15 scientific and professional organizations, early career researchers and industry scientists. The 2020 report, The Plant Science Decadal Vision (2020-2030): Reimagining the Potential of Plants for a Healthy Future, culminates four years of community engagement that has already led to visionary reports on future scenarios, cyberinfrastructure and postgraduate training. 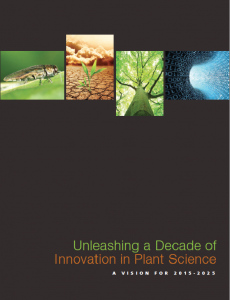 Unleashing a Decade of Innovation in Plant Science: A vision for 2015-2025 (PDF)

Learn more about future initiatives in the plant sciences:

The Plant Science Research Summit 2013 received direct or in kind support from the following sponsors: