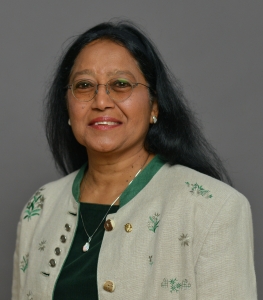 Manajit Hayer-Hartl is recognized for her many breakthrough discoveries in Rubisco biogenesis. Manajit’s group has developed in vitro and in vivo systems to produce active Rubisco and probe the molecular activity of this vitally important but slow and error-prone enzyme. Her group recently solved the mystery of how Rubisco activase maintains activity, and they discovered a dual function for cyanobacterial activase in metabolic repair and in organization of the carboxysome. In parallel studies, Manajit’s group discovered a scaffolding protein that induces Rubisco phase separation into a liquid-like matrix that may enhance Rubisco dynamics. These major discoveries enable the monitoring of assembly, catalysis, and reactivation of metabolite-inhibited Rubisco, both in vitro and in vivo. They also open new doors for biotechnological improvements in primary productivity, and thus the quality of life on Earth. Manajit is also recognized for outstanding mentorship, with her trainees winning awards and gaining faculty positions at leading institutions around the globe.

The Lawrence Bogorad Award for Excellence in Plant Biology Research will be offered again in 2024. Please check the nominations page in January 2024 to make a nomination.