This award honors the Reverend Stephen Hales for his pioneering work in plant biology published in his 1727 book Vegetable Staticks. It is a monetary award established in 1927 for a scientist, an ASPB member, who has served the science of plant biology in some noteworthy manner. The award is made annually. The recipient of the award is invited to address the Society on a subject in plant biology at the next annual meeting. 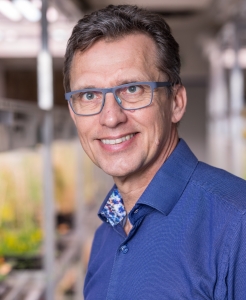 Detlef Weigel is the Executive Director of the Max Planck Institute for Developmental Biology.  He has made notable discoveries in diverse areas of plant molecular genetics, fostered generations of talent, and through his collaborative network made tools and genetic resources available to colleagues across the globe. Detlef has promoted the plant biology community at the international level through service on numerous advisory and editorial boards including 10 years as Coeditor of The Plant Cell.  Detlef’s early plant work led to direct evidence for long-distance signaling to induce flowering and his seminal discovery of a microRNA mutant provided the foundational knowledge to enable artificial miRNA technology.  He has been a pioneer in exploiting natural genetic variation to understand the adaptive value in plant functions from development to immunity, heterosis, and response to environmental change.  His vision of using multiple genome sequences to study genetic variation enabled his studies and formed the basis for widely used resources from the 1001 Genomes Project and online tools that allowed many labs to exploit genetic variation for other research questions.

The Stephen Hales Prize will be offered again in 2022. Please check the nominations page in January 2022 to make a nomination.

2016 – Gloria Coruzzi -a leader in exploring the interface of plant and systems biology and provided the first integrated view of mechanisms controlling the assimilation and use of nitrogen.

2013 – Brian A. Larkins -for noteworthy service to the science of plant biology

2006 – Ken Keegstra – for his pioneering contributions to our understanding of chloroplast biogenesis, protein import into chloroplasts, and the structure and biosynthesis of the plant cell wall

2002 – Elisabeth Gantt – for her pioneering contributions to research in photosynthesis and carotenoid biosynthesis, and for her exemplary service work

2000 *Jan A. D. Zeevaart for his extensive contributions to the elucidation of the mechanisms whereby plant hormones mediate effects of the environment on plant processes such as flowering, growth, and protective responses to drought

1998 *Hans Kende for his seminal contributions to our understanding of the mode of action of the hormones gibberellin, cytokinin, and ethylene

1996 Maarten J. Chrispeels for his research on the interface between cell biology and biochemistry, as a spokesperson for the science, as an inspiring teacher and mentor, and as an exacting editor of the journal Plant Physiology

1994 Winslow R. Briggs for serving plant physiology as a teacher and mentor, as an investigator of how light interacts with internal metabolic and hormonal controls, and as a senior spokesperson for the science

1992 *Clarence A. Ryan for his contributions to our understanding of plant defense based on proteinase inhibitors

1990 *Joseph E. Varner for his fundamental contributions and intellectual leadership in plant physiology

1988 *Oliver E. Nelson, Jr. in recognition of his research in genetic and molecular biology

1986 Olle E. Bjorkman for his important contributions to plant physiology and, particularly, to the area of physiological plant ecology

1984 *Bernard O. Phinney, recognized worldwide as the foremost authority on the function and metabolism of the gibberellins

1982 *Lawrence Bogorad for his pioneering research characterizing the chloroplast genome

1980 *N. Edward Tolbert for his research in the fields of photorespiration and glycolate metabolism

1960 *Perry R. Stout for contributions in the field of mineral nutrition of plants

1932 *Hubert Bradford Vickery for his contributions to plant protein chemistry